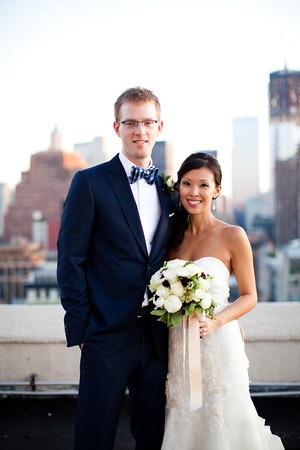 With the close of the year and the beginning of a new one, it is a good time to reflect and offer thanks.
As I ring in 2012, I am happy to recollect on the many wonderful couples that I have served this past year. I have worked with folks from many American states (Oregon, Texas, Missouri, California, Florida, Louisiana, Massachusetts, Washington, D.C., Connecticut, New Jersey, Washington, Arkansas, Missouri¸ North Carolina, Michigan, and more), as well couples coming from Canada, England, Scotland, Australia, Austria, and Sweden.
We’ve had fantastic ceremonies all over Central Park, the Brooklyn Botanic Garden, Jefferson Market Garden, on the Brooklyn Bridge, the High Line, Prospect Park, at the Rockefeller Center Tree, and in front of the Statue of Liberty.  I have been honored to participate in ceremonies at the Tribeca Rooftop, The Library Hotel, E Space, 3 West Club, Metropolitan Building, Spice Market, Le Parker Meridien Hotel, Capitale, e Square, The Brownstone, Raphael Vineyard, Columbia University Chapel, Ritz Carlton, W Hotel, the de Seversky Mansion, Gramercy Tavern, Bryant Park Grill, Battery Park Garden, 21 Club, Central Park Boathouse, 202 East, the Palace Hotel, the Gramercy Park Hotel, and, of course, the Yale Club, among others.  Finally, I had the privilege of my once-in-a-lifetime helicopter wedding, flying over Manhattan at dusk, Thanks to Anne and John, from St. Louis.
As impressive as that was, it paled in comparison to the extraordinary piece of history that we have played a small part in over the last six months—marrying gay couples under New York’s Marriage Equality Law.  It still gives me chills!
What a spectacular year it has been. I say thank you to all of my couples, near and far, and to the terrific people I have worked with on their behalf, including gifted photographers, some of whom have shared beautiful pictures included in this slide show. I also thank my super colleague Noemie Bonnet for putting together this video! Congratulations to all! Happy New Year!
p.s. Joycelyn & Kevin, pictured above, are among my 2011 favorites!  Their fantastic wedding at the Tribeca Rooftop was called off because of the Hurricane Irene.   They handled the setback with grace and style, staging a “do-over” in October.