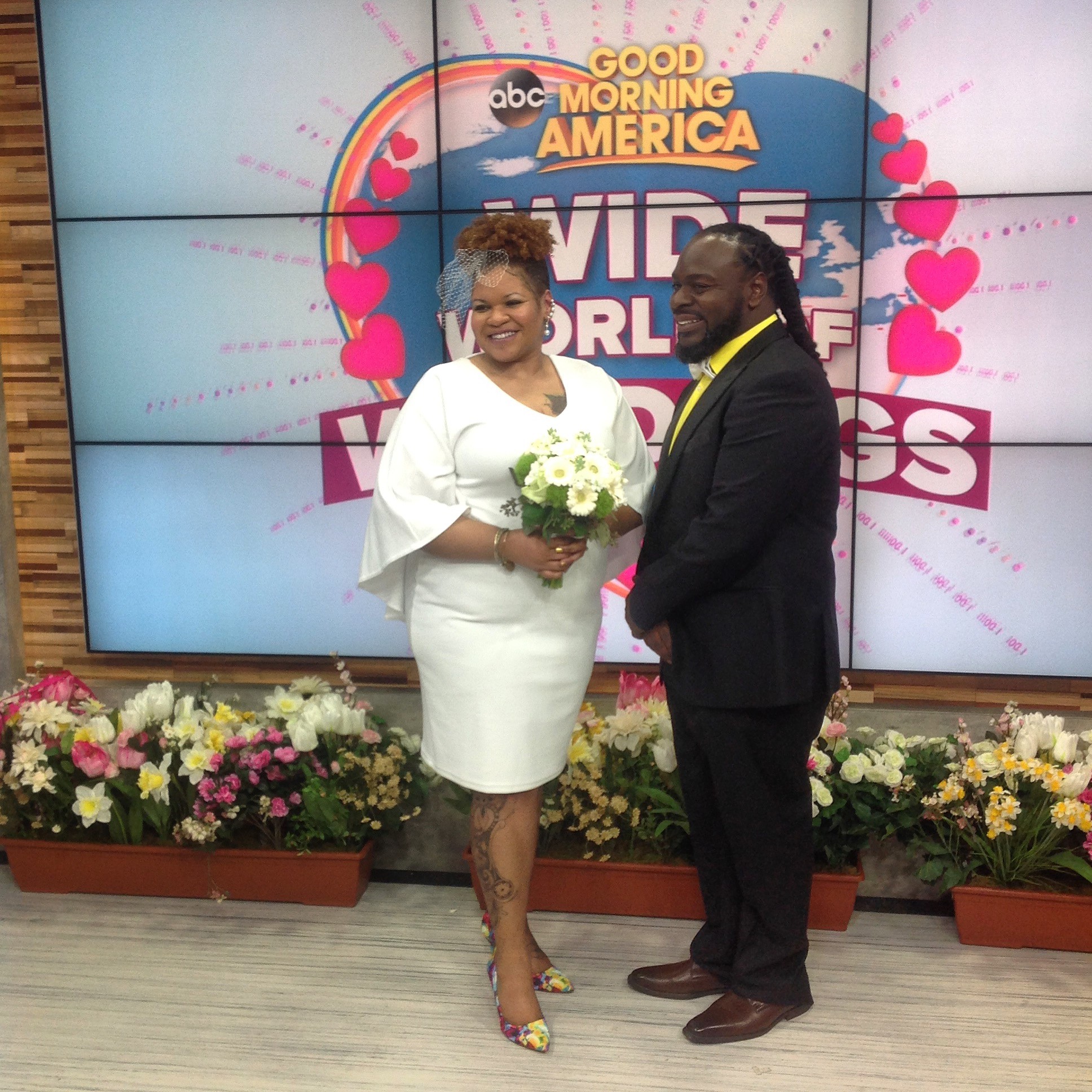 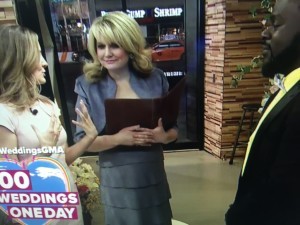 A few weeks ago, I was contacted by a lovely young producer with ABC’s morning program “Good Morning America.” With advertising “sweeps week” on the horizon, GMA had come upon an epic idea to bump up viewership during that all important period, when advertising rates for the remainder of the year are calculated. Over the course of a 24 hour period, GMA would orchestrate the marriage of 100 couples. As if that idea weren’t outlandish enough, the weddings were to take place in locations around the globe: GMA Time’s Square studio, Las Vegas, Detroit, California, Hawaii, Disney World, Scotland, and beyond. Would I like to help, she asked? Never one to turn down a challenge, I told her to count me in. (Surely this would be one for the bucket list.) As this is the busiest season for my day job, I raised the degree of difficulty by suggesting that I should take the “hoot owl” shift, during the middle of the night. And, so it was.
The GMA producer was quite pleasant and organized, wrapping up the planning before she headed out on maternity leave, passing the final execution on to her colleagues. I was struck by the complexity of the undertaking and the relatively short time-horizon that the team had to pull it all together. This was the first time I had a glance “behind the curtain” of any type of television production, so it was quite mysterious. The 24 hour wedding marathon (Wide World of Weddings, a nod to ABC’s Wide World of Sports, no doubt) had the feel of an estrogen-laden three ring circus…and I mean that in the best sense of the word.

The festivities kicked off with a televised wedding in Times Square during the regularly broadcast program, which then led into a live streamed online extravaganza of wedding after wedding after wedding, punctuated by interviews with participating couples and in-studio demonstrations and presentations of all sorts (talks with vendors, floral demonstrations, conversations about wedding trends, etc.). The event culminated the following morning, with 16 couples tying the knot in a group wedding in Times Square, officiated by weather man Sam Champion.

Over the course of the day and night, there were gay couples and straight ones…young and old. Some came with large bridal parties and others were alone, accompanied only by guests at home, online. And, of course, they wore all manner of bridal attire! For those marrying in the Times Square studio, they arrived to find a staging area with dresses and suits and tuxedos of all sizes and styles. They could pick any look for the day. Professional hair and make-up artists were standing by to get everyone camera-ready. A dozen or more bouquets were ready to be snatched up for the nuptials. Cupcakes, champagne, and bubbles were strategically placed about. No detailed was overlooked.

The actual weddings were of a dizzying variety: one of the remote locations was the New York City Clerk’s office where the ceremonies took place at warped speed (I’d guess less than three minutes each, starting with that antiquated question, “If there is anyone who objects to this marriage, speak now or forever hold your peace!”). There were Vegas weddings, beyond kitschy and officiated by Elvis, contrasted with stately judge-led ceremonies in the breathtakingly beautiful rotunda of San Francisco’s City Hall. And there was more…much more.

The in-studio weddings in New York were primarily led by officiants trained by the Celebrant Institute & Foundation. I, like my colleagues, worked to personalize the ceremonies, despite the quick turnaround time between our connection with the couples and the actual ceremonies. To the extent possible, we used the tools of our craft—telling the couple’s unique romantic story, offering various vow options and other personal touches, including unique readings—regardless of the unusual circumstances of the weddings.

Speaking for myself, my couples had been together for many years. They had traveled considerable distances to get married in ABC’s Times Square studio in the middle of the night last week—and the brides, in particular, seemed rather nervous. My hope is that the connection we made before the ceremony and the extent to which I was able to tell their story and reflect their sensibilities during this curious wedding made them feel a bit more comfortable. I wanted to give them a little piece of mind that we were honoring the sacred nature of this rite of passage, even though the wedding was done in something of a fish bowl in Times Square. All in a day’s (or night’s) work, for us Celebrants.