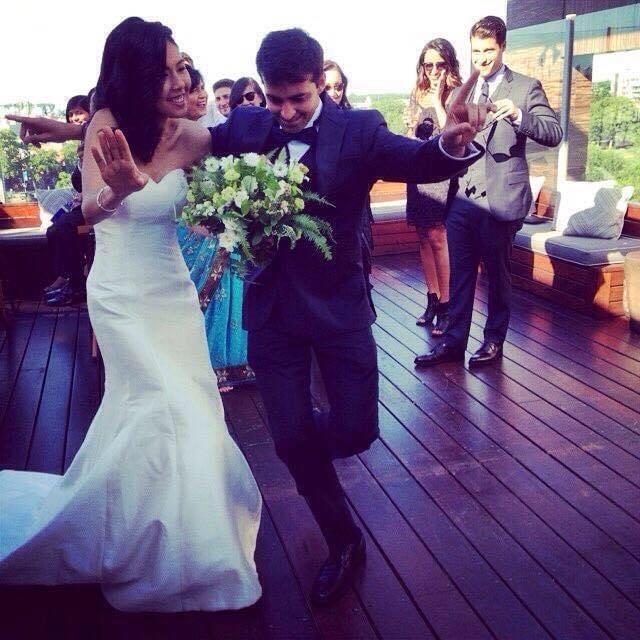 Several weeks ago, I received a call from the Izzy Greenspin, the delightful Editorial Director for Racked online magazine. As part of a new promotional effort, they were “giving away” a wedding during the month of June. A variety of wedding “vendors” had volunteered to serve a lucky couple selected by the magazine. Asked if I would officiate, I quickly gave an enthusiastic “Yes!”

Everything about the experience felt perfect. The couple selected—through an Instagram contest— for this gift of generosity was just my type. The groom Akash Garg, born in India and schooled in the US, was studying for a PhD at Columbia—in a technology field that was far beyond my comprehension. Having previously worked in Silicon Valley, he seemed to combine an artistic vision and technological prowess. His adorable bride Jacqueline Berman was a Chicago native, who recently completed an urban planning degree at the University of Southern California. My grandmother would say, “She’s as cute as a button.”

The bride and groom had been selected, in part, because of their ultra-romantic courtship story. A month after meeting, the bride found herself in Gao, India doing research for her academic program. She invited her very new beau to join her, where they would share their first kiss on the beach. Now, sometime later, they were engaged, and living in NYC, as they continued their educations and professional careers.

The team at Racked and their parent company Vox Media selected McCarren Hotel & Pool, located in Williamsburg, as the venue for the nuptials. After seeing the funky hotel and its drop dead view of the Manhattan skyline, I made (another) promise to myself that I really should leave Manhattan more frequently. The hotel’s event coordinator Alex Johnson was spirited and welcoming, flawlessly organizing the affair.

The bride was taken care of from her pretty head to her toes and wore a stunning Heidi Elnora gown from Nordstrom’s Wedding Suite. She was styled and pampered by Blo Blow Dry Bar. Meanwhile, the groom looked equally stunning in his tux provided by The Black Tux. His beloved had selected a picture perfect blue bowtie for him that jumped out in the photos, taken by Daniel Silbert. Everything was suberb from the wedding cake by the always popular Magnolia bakery to the flowers from Sprout Home and rings courtesy of Catbird Jewelry Store.

The ceremony was on the hotel rooftop, which featured a view of the East River and Manhattan skyline that is impossible to beat. And, to this spectacular vista, the team, led Jennifer Leibow, added a drapery of red ribbon streamers that fluttered overhead in the late afternoon breeze. The color was selected in honor of the Bride’s Chinese ancestry, as red is considered a lucky and festive hue, often featured prominently in Chinese wedding celebrations.

I was tasked with developing a ceremony as special as the overall occasion. After learning more about Akash and JJ, I was able to include some of their romantic story in the script. They selected Buddhist-inspired wedding vows (some of my favorites). And as my special gift to the bride and groom, I added some cultural references in honor of their heritage: a bit of Chinese wedding folklore, a reading from Lao Tzu, the ancient Chinese poet and philosopher, and a Hindi wedding mantra at the conclusion of the ceremony. They were pleased, as was I.

I was truly honored to participate in this very special occasion. To the folks at Racked.com, I say a warm Thank You! And to Jacqueline and Akash: “Here’s to many years of health and happiness. Peace and All Good Things to You!”