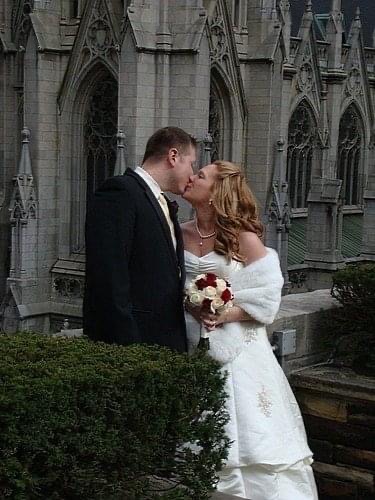 Several years ago, dreaded news was delivered to many American women. This was when HBO announced that the groundbreaking program “Sex and the City” (SATC) which took place in New York would end production.

In a retrospective of the show’s success, actress Sarah Jessica Parker and program creator Darren Star sat down. They speculated about the elements that distinguished SATC from other series. They argued that it was beyond the witty repartee. It was the City of New York that partly explained the show’s enormous popularity.

New York was, in fact, the fifth leading lady of the show. Along with Samantha, Miranda, Charlotte, and Carrie, New York Shined. SATC devotees, like my pal Denise, know that Sex and the City shined a light. It shined a light on all that we love about the Big Apple. From famed landmarks to obscure local haunts. Everything and anything in between.

As a Celebrant, I have come to consider our heroine NYC as a most important backdrop—or guest, if you will—at destination weddings, large and small.

Lately, I have been working with couples traveling to New York for their own special wedding ceremonies. They are casting iconic New York images as important elements of the wedding.

Thanks to the generosity of Cheryl Fielding-LoPalo of Cheryl J. Weddings & Events, I was able to work with Matt and Sherri. They are a young couple from suburban Washington,D.C.

Along with their closest family members, Sherri and Matt wed in Rockefeller Plaza. There is a sweet garden tucked in the middle of Manhattan. The 602 Loft & Garden, part of the famous “Top of the Rock.” This perfect wedding space is nestled in the bustling midtown area. It comes with a manicured garden, reflecting pool, and spectacular landscaping. In every direction, we were surrounded by breathtaking views of NYC’s cityscape. The photo in this posting is our stunning couple poised before St. Patrick’s Cathedral. That is one of New York’s most important religious institutions.

As I finish up this blog posting, I am on the Facebook page of my friend Christina Buzzetta who (lucky girl) works at TheKnot.com. I am smiling as I notice her profile picture caption is a famous line uttered by our friend Carrie Bradshaw on Sex and the City. “If you only get one great love, then New York may just be mine.” I think a lot of brides, in New York and beyond, feel just the same way.