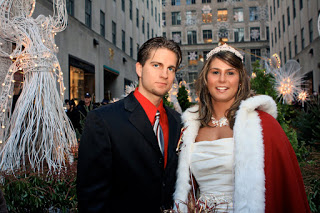 One of the great things about a Celebrant-led wedding is that the ceremonies are breathtaking and spectacular in unexpected ways. Lately, it seems, there is an emerging interest in so-called theme weddings. The possibilities for these gatherings are only limited by the imagination. Winter happens to be a huge one for many couples. As such, I love officiating these events because they truly are unique!

Whether a costume ball for a Halloween wedding or an outdoor ceremony reflecting the bride and groom’s fascination with Medieval history. These theme weddings can be a breath of fresh air. Not only for the couple but also for guests, and even the officiant. Furthermore, they can be as simple or as complex as you like.

I love being a part of these themed weddings and actively encourage them with my own special couples. I was fortunate enough to participate in a themed-type event on Christmas Eve. For those who haven’t been to New York City during the holidays, it is hard to convey just how magical it is. Even during the challenging days of the recession, the retailers, city officials and others, bring out the finest holiday decorations, as they have for so many years.

Fifth Avenue, a world class shopping area, has absolutely spectacular decorations from the window displays at Saks Fifth Avenue to the Cartier Jewelry Store, festively wrapped as a package.

For blocks and blocks, one will see lights and adornments. As far as I know, they are simply unmatched in other grand cities around the world. Walking north on Fifth Avenue, one will eventually bump into Central Park. Always lovely, it is especially stunning when blanketed in snow.

However, the crown jewel of the winter decorations is most certainly Rockefeller Plaza, perfectly placed in midtown Manhattan. With the enormous Christmas tree, skating rink, life-sized nutcrackers, and 50+ waving flags in red, green and gold, the Plaza will turn even the most hardened holiday scrooge into a jolly soul.

On Christmas Eve, Karina and Nick, a lovely young couple from Ohio, harnessed the winter exuberance at Rockefeller Plaza into a late afternoon wedding ceremony. It was a real delight. Karina, a naturally pretty woman, looked like a winter princess.

As such, she wore a beautifully designed strapless white wedding dress with all of the beading and sparkles of a new bride. On her head sat a crystal tiara that would do the Swarovski Company proud.

Furthermore, draped around her shoulders is a custom-made hooded holiday cape—cherry red with white fur trimming. Her bouquet, made in England, including a bundle of winter berries. Even the groom is sporting a blazing red shirt under his black suit. As such, I am in the spirit with my own red dress.

While the couple planned a private ceremony at the Plaza promenade, with the tree prominently in the background, I knew it would be anything but “private.” Passers-by love to see weddings—always, anytime, and anywhere.

Furthermore, for tourists lucky enough to be in New York for the holiday, a romantic wedding in front of the world’s most famous Christmas Tree is a feast for the eyes and the heart. Those in the area gathered around to be a part of “our” wedding. I could literally see the twinkle in a number of eyes. No doubt these were people renewing their own wedding vows, privately in their hearts.

At the end of our sweet ceremony, a tourist and police officer served as our witnesses. The bride and groom were swept away. They took photographs at landmarks including St. Patrick’s Cathedral.

They completed their evening with a carriage ride around Central Park and dinner at the famed Tavern on the Green. Our couple has returned to family and friends in Ohio. However, I know they will cherish their fairy tale wedding for the rest of their lives.

As such, I am returning to my life and making the most out of my amazing journey as a New York Officiant!