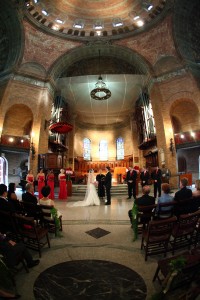 I am from Oklahoma which, like many other Midwestern states, is filled with robust state-supported colleges and universities, but few private institutions of higher education.  I have hypothesized about why this is the case—the migration patterns in American history, the timing of the Morrill Land Grant Act which “seeded” many of our large public universities, the populist political culture of the Midwest and Plains, and so on.  So it was a great surprise when I “came back east” to find beautiful Chapels on the campuses of America’s oldest private universities including Columbia University, Princeton, and Yale.

When I arrived at Yale for graduate school, I would regularly find myself in the beautiful Battell Chapel.  Yale University was originally founded by Congregationalists, and Battell Chapel which was originally built as a Civil War memorial.  According to those who follow architecture, it was designed by Russell Sturgis in the “High Victorian Gothic” Style.  Throughout the Church, there are reminders of historical facts about the university such as the name of the College’s founder Elihu Yale’s etched in the center window.  The ornate Chapel now provide a home for daily meditations, regular religious services, concerts, and—of course—weddings.

Columbia University in New York has a similar historical development.  Columbia has long ties to the Church of England, now known as the Anglican Church (in America called the Episcopal Church). St. Paul’s Chapel was built in the early 1900s, in a style adapted from Northern Italian Renaissance architecture.  The exterior and interior are filled with religiously inspired Latin phrases and statues inspired by the Old and New Testaments.  The physical space of the interior is designed in a Latin cross plan.  Three large stained glass windows decorate the front of the chapel and sides, with 16 windows displaying family coats of arms of some of the most significant people associated with Columbia.  One of New York City’s finest pipe organ resides there.   The inside dome ceiling is stunning.

Students who have graduated from Columbia enjoy the privilege of marrying in this elegant space.  The building hosts couples coming from all philosophical and religious traditions.  It is one of the few “churches” where an outside clergy, like me, is the norm.  I have had the opportunity to marry two gracious couples in the Chapel.  This summer I married Robert and Maria, who met as Columbia Undergraduates.  I recently performed a winter wedding for Meg and Jason.  Jason earned a PhD in mathematics at Columbia.  It is a real honor to officiate in this grand academic location.  Standing at the front of a church steeped in history, with the pipe organ pounding out processional music, I  witness an overwhelming moment.  The front doors of the Chapel are thrown open, and the bride stands ready to walk down the aisle to exchange lifetime vows.  I get goose bumps just thinking about it!