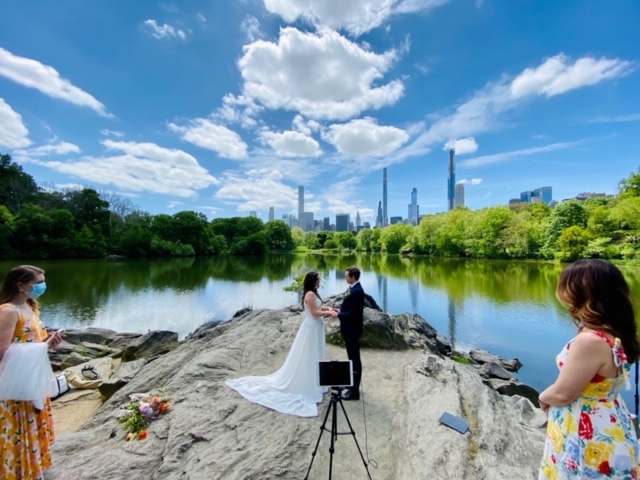 A number of weeks ago, I was fortunate enough to officiate the wedding of this beautiful couple, originally from South Africa, courtesy of planning by Simply Eloped.  Their wedding was before the first phase of re-opening here in New York City.  So while the couple gathered in Central Park for their vows, I was with them remotely via a “zoom meeting.”

I was drawn to them immediately, partly because I have a number of friends from South Africa.  Likewise, just weeks before the 9/11 attacks in New York, I took a life changing trip to that beautiful country.  I also felt a kinship as the bride and I shared the same surname, Ritchie, which is not all that common.

Ritchie is a name of Scottish ancestry, and I felt strongly that I wanted to recognize that connection we shared.  And so sometime after the wedding, I boxed up this Scottish Quaich and sent it to the couple.

The Quaich (pronounced “quake”) is generally cup with handles on each side, used to toast special events in the life of the family.  They are perfect for weddings, anniversaries, or baby christenings.  Some refer to the quaich as a friendship cup.  It is known to have originated in the West Highlands of Scotland.  Apparently, the word is derived from the Gaelic word “coach” which is derived from the low Latin “caucus,” a drinking cup.  Whether a large gathering or small, virtual wedding or one in “real life,” this is a perfect sweet gift for a newlywed couple.